Renting a house in Buffalo for the season 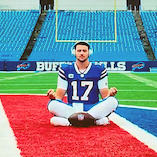 By extrahammer,
June 24 in The Stadium Wall